An enthusiastic (but not expert) group, sharing our knowledge at various birdwatching venues. We meet most months (not December) at various sites mainly around the Suffolk coast.  At the moment the 'meeting day' varies from month to month and meetings usually begin at 10.00am.

Six members of U3A enjoyed a pleasant sunny morning at the delightful Fingringhoe Wick Nature reserve which is over 200 acres with a new intertidal area. The reserve is situated on the banks of the Colne with a salt marsh and diverse areas of woodland, Heath and scrub, ponds and lakes. There are 10 hides to view wildlife comfortably seated for older members!

We had a 10 minute talk from a volunteer who told us that it is the best place for nightingales especially in the evening during April. Brent geese can be found at the end of the year and in Autumn,  and migrate to Siberia landing first at the Thames estuary to eat the eel grass.

We had a very pleasant walk with Dudley Shepperd, he lives in Saxmundham. He is very knowledgeable and clearly loves the place.

Plus one speckled Wood butterfly and we heard a Cetti's warbler !

The warden was very friendly and very proud of the reserve!

On a gloriously sun lit morning we walked along the edge of the reed beds to low tide on the estuary. Perfect for waders! (and wellies as it was very muddy!) There were six in the group and we spotted Redshank, Curlews, Avocet, Little egret, Grey heron, Wigeon, Teal, Black tailed Godwit, Two seals (covered in mud so uncertain if they were grey or common), Shelduck, Lapwing, Green Woodpecker, Kingfisher, Kestrel as well as a Red Admiral butterfly and damsel fly getting their season confused.

On a very dull afternoon, we walked along the path and crossed the road following the River Deben upstream. 7 members were present. The mud flats had one of the largest flocks of Lapwing that I have seen in a long time, Shelduck, Redshank, and two VERY close Blacktailed Godwit. As we walked along the river there were some bare trees "wearing" many Cormorants as decoration and one Grey Heron. The only other excitement was caused by a pair of Swans in formation flight, a moorhen, Little Egret and Teal. A pleasant walk in good company.

The location was lovely, plenty of spring flowers, particularly primroses with signs of bluebells to come. There were not many birds, but we were treated to plenty of birdsong, particularly from the many robins around. Birds included many of the usual locals, tits, blackbirds, crows, robins, etc. There were quite a few chiffchaffs singing and performing which were the highlight.Two herring gulls, Several long-tailed tits,Not much else.

Lovely walk through the woods and around the meadow. Surprisingly dry given the weather recently. David gave us a bit of the historical background to the site which helped put it in perspective. Four members attended

Beautiful location and the weather ideal. 11 members attended. The habitat consisted of a crystal clear stream, brambles, mixed deciduous trees, reed beds and marsh. Birds heard but not seen were nightingales, lesser whitethroat and green woodpecker. Birds seen by some or a few included cuckoo, blackcap, chiff-chaff, and at the very end... a goldcrest and a very obliging treecreeper, who stayed close and easily seen for ages. Paul Lloyd took this amazing photo. 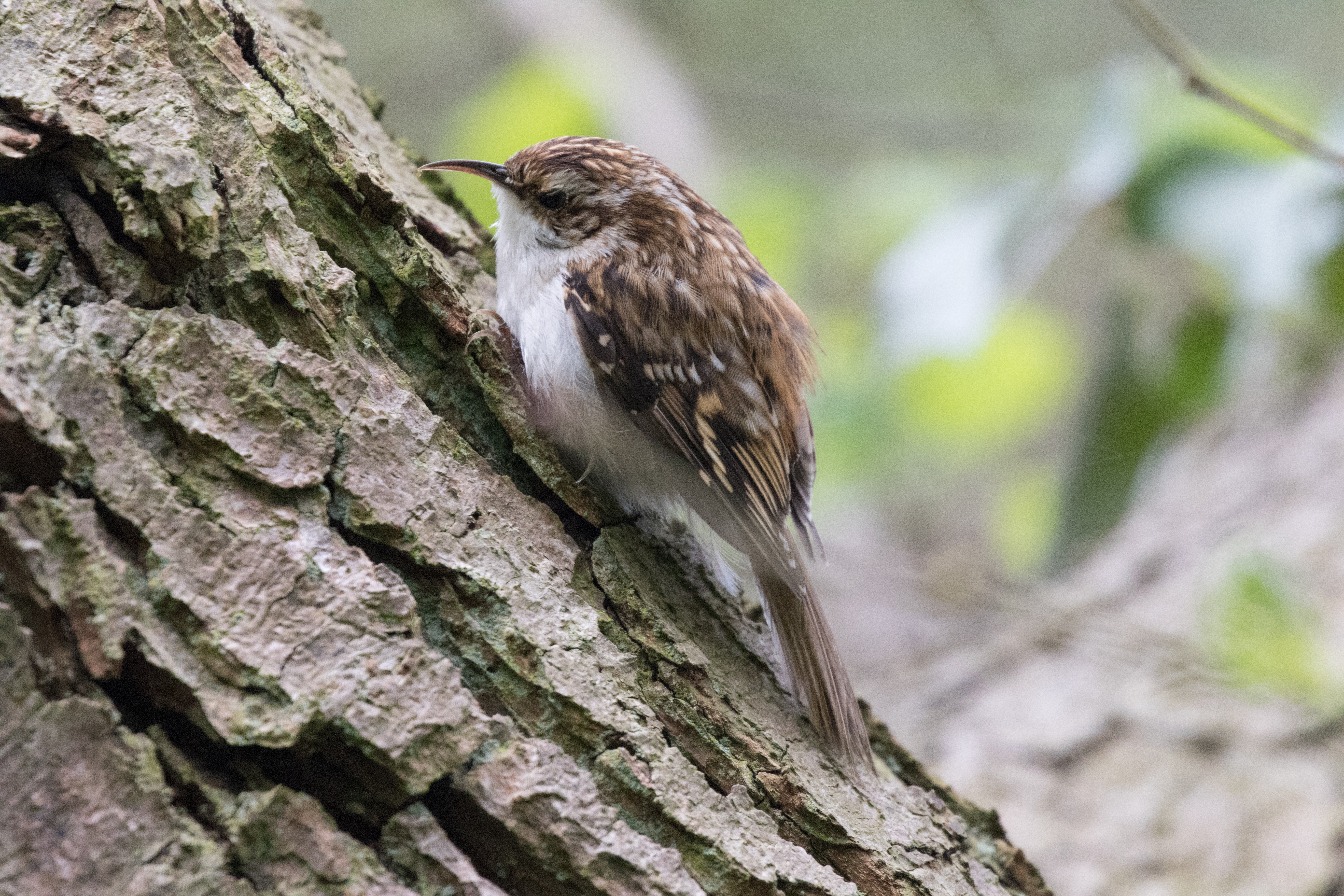 Three members enjoyed a walk in glorious sunshine and were rewarded with the following sightings:

Prior to the group arrival, the Leader spent two hours in the Bittern Hide and watched flying Bitterns, several Marsh Harriers, female adult, juveniles AND mature male, Common Tern, Little Egret, Barn Owl, Pair of Shovellors, Hobby, and Mute swan in flight.7 members attended on another very hot day. We walked to the sand bank to watch young Sand Martins waiting at the entrance holes to be fed as the adults swooped backwards and forwards busily, then via the North Hide to the East Hide along the beach and back to the Visitors Centre. The group spotted Avocets, Greylag and Canada Geese, and Lapwing at the North Hide, and from the East Hide; Black tailed Godwit, Lapwing, Shelduck, Coot, Avocets, Common and Sandwich Terns, Barnacle Geese, Oystercatchers, Shovellors, Kittiwake, and Spotted Redshank and one of us stayed on to spot Knot, Marsh Harrier and Bittern flying.

Seven of the Group arrived at Dunwich beach car park just after a heavy shower started. We quickly adjourned to the nearby cafe for warming refreshments. By 10.30 the clouds had gone and the sun was shining. As we set off through the village a Goldfinch was heard and seen high up on a telegraph wire. We turned right onto a wide track sheltered from the wind with woodson the left and intermittent views of the sea on the right. A Hare was spotted in the field and a Chiff Chaff was heard but it took some while to see it on a tree full of blossom. Then a male Blackcap was heard and seen hopping about in the foliage. A Chaffinch was more obliging as it sat high on a bare branch. Next a Blue Tit preening itself was clear for all to see. Looking over a field towards the sea a male Pheasant was nearby, two pairs of Shelduck could be seen in the distance and a green Woodpecker heard. After one and a quarter hours we retraced our steps. We may not have seen any unusual birds but we all appreciated the time together and having good views of the birds and appreciated their song. Thank you to Mary Thrower for leading us today and supplying the report.

Only 3 of the group met in the Minsmere car park on what was a beautiful sunny day with a slight breeze. We took ourselves off once armed with Minsmere's recent sightings list. Along the walk we first came across some incredibly fast Sand Martins busily leaving the sandy cliffs. Moving onwards along the North walk we eventually came to the East Hide, spotting a multitude of different birds and then moving towards the Open hide and then the sluice gates we encountered a Dragonfly watcher who had just spotted a Norfolk Hawker and was quite chuffed about this although we saw Dragonflies they were all airborne. Passing the impressive Longhorn cattle we moved along to the other Hide which did not yield so much variety although over the morning we did spot Avocet, Greylag Geese, Shelduck, Oystercatchers, Lapwing, Redshank. Little Tern, Common Tern, Black-tailed Godwit,and Reed Bunting. Quite happy with our mornings sightings we adjourned to the Cafe to make some notes and talk about our next meetup.

We are looking for some new members in our group. Experienced birdwatchers are welcome along with novices who are willing to learn alongside the other members. We plan on having a regular walk once a month, the 3rd Monday of the month (not the second as in the handbook) although if anyone wants to organise an extra walk this would be welcome subject to demand.

A really good turn out at the Open day attracting 12 new members to our happy band of birdwatchers.

Our first outing of the season was to the RSPB Reserve at Minsmere. A rather dull, drizzly and misty day but 12 of us turned up for our walk around the Reserve. Our best success was around the Scrape and levels where there were a good variety of Birds. Amonst the was a Bearded Tit, Godwit, Snipe, Avocet, Lapwing,a pair of Little Stinst &  Shoveler. By the Reeedbeds we spotted a Great crested Grebe, Marsh Harrier  and Heron that we noted. Afterwards the Group made good use of the Cafe to warm and dry out and to have a chat. Even though the weather was not so nice the Company was good and we look forward to next month at Hollesley Marshes.

A great turnout by 20 members on what turned out to be a heavily wet morning. We met Lyndsey and Dudley from the RSPB who gave us an overview of the site and guided us down towards the river. Our members spotted, Mallard, Teal, Wigeon, Shoveler, Gadwall, Cormorant, Canada Goose, Greylag Goose, Herring Gull,Lesser Black-Backed Gull, Mute Swan, Grey Heron,Curlew, Redshank and Starling plus some spotted a Marsh Harrier in the distance. A special thank you to Mick Bennet for the list as due to the worsening weather it was incredibly difficult to see through our binoculars let alone write anything down! Some of us went back to the Cafe at the Prison and enjoyed a warm drink and tried to dry out. Dudley Shepperd the Site Warden who we met last back on the U3A Birdwatching Group in October 2017 clearly loves this place and truly added to the occasion, we must go back another time when we hope for drier weather. The Group raised a nice contribution for the RSPB which I handed to Lyndsey Record who manages the RSPB sites around the Suffolk coast and thanked her for organising the morning.

Another good turnout with 20 members of the group on a bright sunny day although a brisk cold wind prevailed. Caught by our team in the binoculars and scopes we saw the following, Redshank, Curlew, Avocet, Widgeon, Teal, Lapwing, Dunlin, Mute Swan, Little Grebe, Shelduck, Little Egret, Black-headed Gull, Great black backed Gull, Herring Gull, Carrion Crow, Black tailed Godwit, and a Knot. In the bushes alongside the estuary Blue Tit, Great Tit, Long tailed Tit, Robin, and a Buzzard high overhead the Trees, not forgetting one lonesome Seal basking on a sandbank. We also spotted a Gull trying to decide what to do with a dead Eel held in his beak. Overall a good sighting day, lots to remember. Thank you Mick Bennet, Richard Barnett and Steve Rickett for confirming the Birds and Steve for his picture's of the Little Egret and the Curlew. 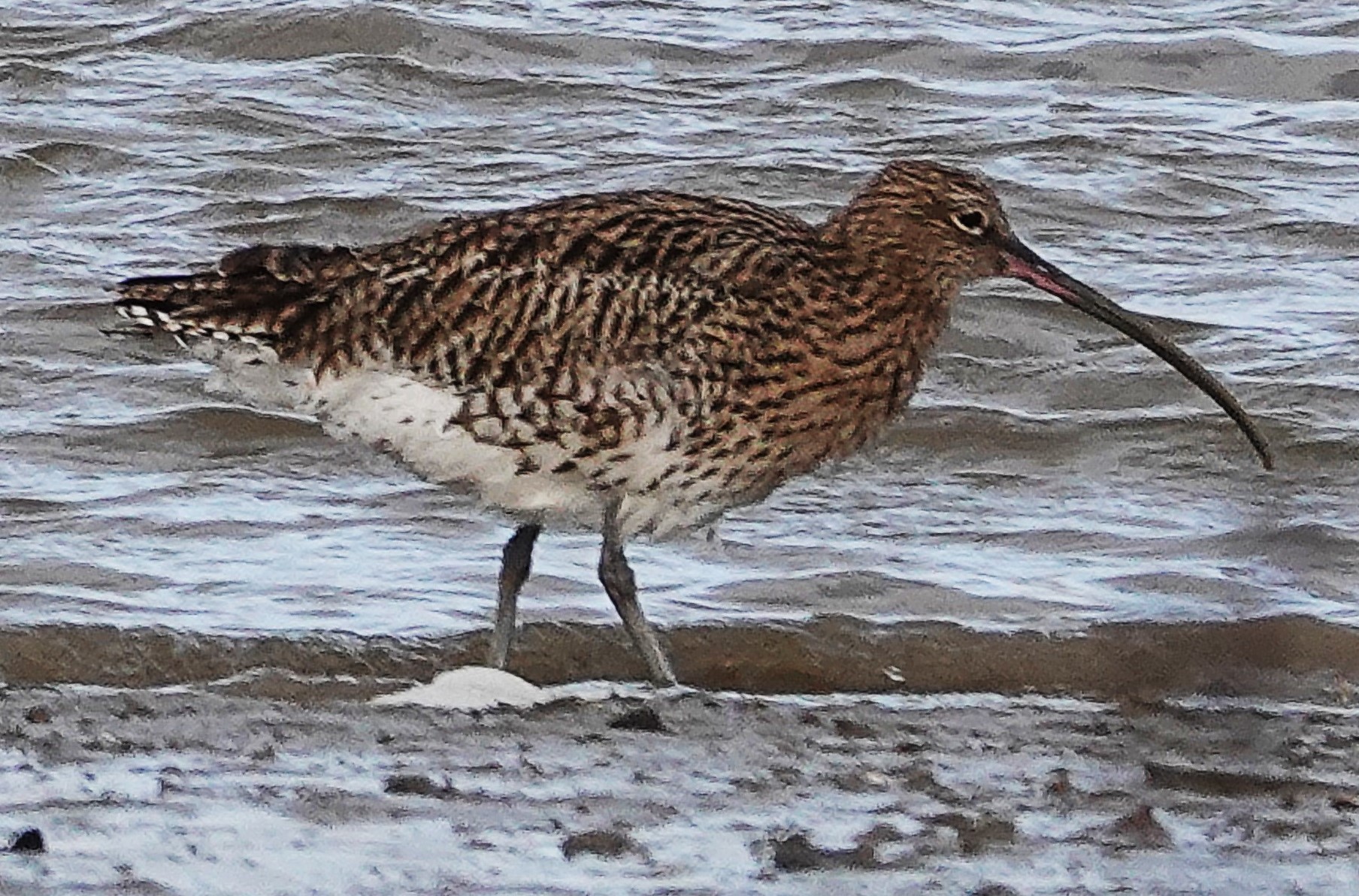 A lovely bright start with no wind on the coast and a record turnout of 23 members of the U3A Birdwatching Team made this a most memorable day. Amongst the many birds spotted were, Cormorant, Little Egret, Heron, Whooper Swans, Greylag Goose, Canada Goose, Shelduck, Widgeon, Gadwall, Teal, Pintails, Mallard, Shoveler, Tufted Duck, Red Headed Smew (picture by Mick Bennet) Marsh Harriers, Pheasant, Moorhen, Avocet, Black tailed Godwit, Black-headed Gull, Herring Gull, Wood Pigeon, Pied Wagtail, Wren, Dunnock, Blackbird, Robin, Redwing, Long-tailed-Tit, Blue Tit, Marsh Tit, Great Tit, Magpie, Jackdaw, Carrion Crow, Starling, Chaffinch, Goldfinch and Mute Swan. We also spotted a Bull Seal out in the sea near the beach (Thanks to a Minsmere guide for informing us which Seal it was) Jude, one of our members stayed on almost to dark and saw 24 Marsh Harriers coming in over Minsmere as well as Curlew and a Barn Owl and on the ground many Deer. Our next trip will be to Alton Water where we will meet in the Main Car Park at 10.00am on Monday 17th February. Thank you to Richard Barnett, Mick Bennet & Jude Banks for the list of sightings today. 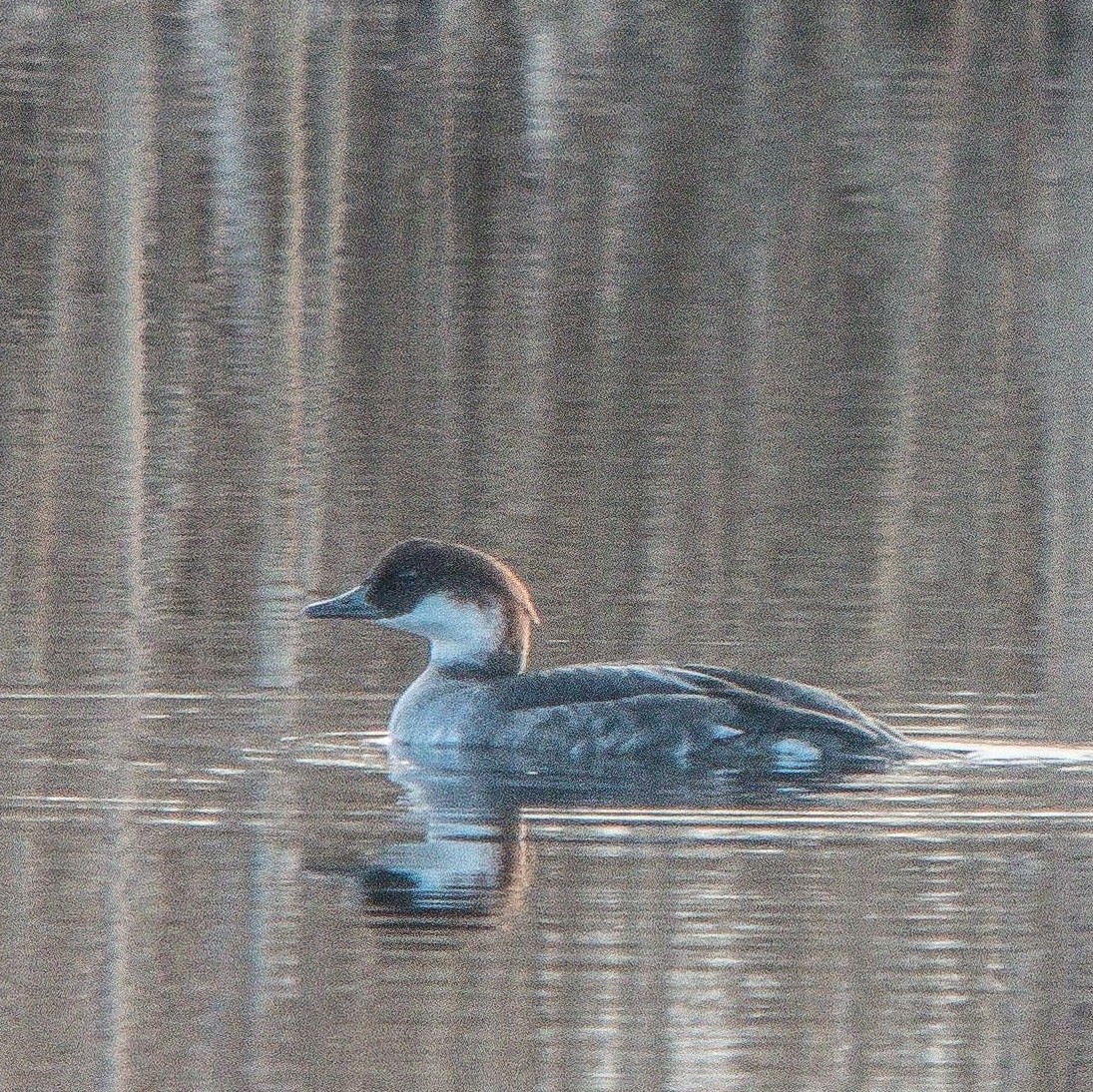 On a  bright but blustery day 12 members of the U3A Birdwatching Group met up in the Car Park and headed out to the left of the Reservoir full of anticipation for a fine mornings birdwatching. Unfortunately most of the birds had taken cover but we did spot a large flock of Great crested Grebes on the water whose handsome plumage sparkled in the sunlight. We also saw fly past a Long tailed Tit, Goldfinch, Mallard in flight and two Eqyptian Geese. Some of us missed the Cormorants and the Chaffinch but thanks to Jude for the additions to our short list. So after our walk we headed back to the Cafe for refreshments. Pictures by Barry Chittock, thank you. Our next walk is to North Warren, Aldeburgh on Monday 16th March. 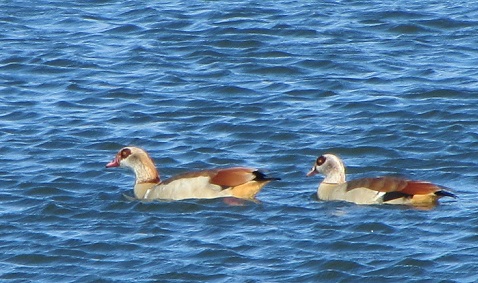 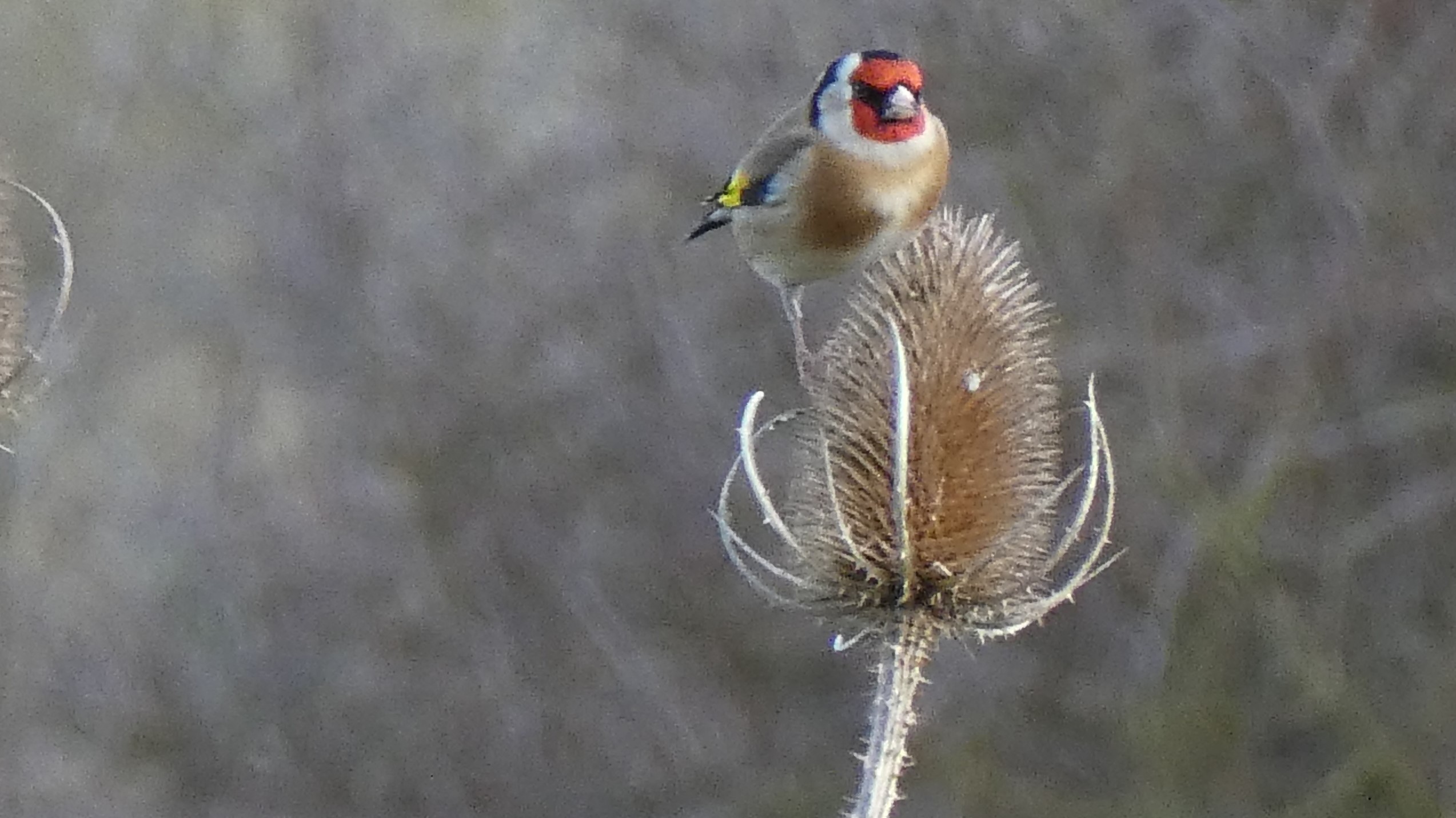